Congenital Pseudarthrosis of the Tibia

Congenital pseudarthrosis of the tibia (CPT) describes a condition of the lower leg ranging from an anterolateral bow of the tibia (a curved but intact bone) to a frank pseudarthrosis (“false joint” or bone nonunion, where the two ends of the tibia bone are separate). The fibula, which is the smaller bone in the lower leg next to the tibia, may be affected in about one third of patients. Periosteum is soft tissue that covers bones and is normally thicker and stronger in children as compared to adults. In the setting of CPT, the periosteum is abnormally thick and described as hamartomatous.

The true cause of CPT is unknown.  It  may be associated with an underlying condition such as Type 1neurofibromatosis.  However, it can also be an isolated finding without any associated condition. 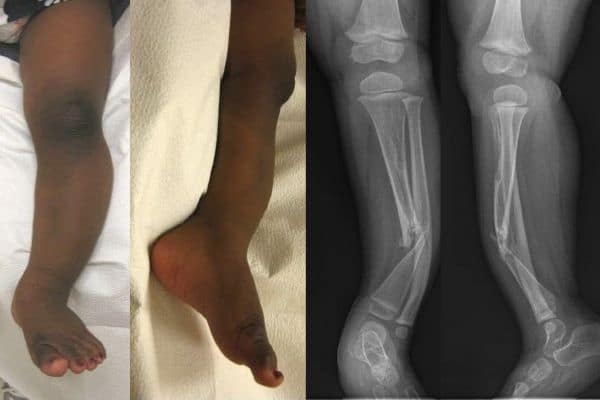 Many different ways of classifying CPT have been described.

One of the clinically useful classifications was described by El Rosasy et al. with types:

1 – not yet operated upon

Another clinically important distinction is whether the tibia is intact or broken.

After reviewing your child’s symptoms, medical history and prior treatments as well as your family history, your doctor will thoroughly examine your child. This will include a full examination of the skin including areas such as the under-arm area and groin area to assess for skin freckling that may be consistent with the possible underlying etiology of neurofibromatosis. Your orthopaedic surgeon will also assess the range of motion of the hips, knees and ankles and assess the alignment of both lower extremities as well as a potential difference in lower extremity limb lengths. Radiographs of the lower extremity are an important part of the examination and will help guide the treatment recommendations, with examples of a child with CPT and corresponding radiographs shown below.

Although the mainstay of treatment for CPT is surgery, there are a number of nonoperative management options. Patients with an anterolateral bow of the tibia and without a frank fracture may be treated with a clamshell type brace. The goals of the brace are to allow for activities while delaying deformity progression and progression to fracture. Casting may be used at various intervals as well. Even after successful correction surgery, most children are treated with bracing until they are done growing.

There are a few modes of medical management that may at times be used to supplement the operative interventions described below. Bone morphogenic protein (BMP) is a biologic agent that stimulates bone formation and may be used locally at the site of the pseudarthrosis to encourage healing. It is important to note that this is an off-label use of BMP. Bisphosphonate medications interfere with the function of cells called osteoclasts that are responsible for removing bone and have been found to be overactive in the setting of CPT. A bisphosphonate infusion (through an IV) may be used before and/or after surgery as part of a comprehensive treatment of CPT. Given the potential side effects, however, it must be carefully administered initially in the hospital setting, and certain laboratory tests must be monitored before and after the infusion.  In most children, the infusions are very well tolerated.

The greatest challenges of CPT are both correcting the crookedness of the bone and getting the bone to heal.  These challenges of treating CPT have led to a number of different procedures used for this condition. The overall goal of surgical management is to remove the diseased portion of the bone and the hamartomatous periosteum and replace it with viable tissue and stabilize the bone to promote healing. The alignment must be corrected and maintained. One or several of these surgical techniques may be used at the same time in treatment of CPT.

Support of the tibia with an intramedullary rod is a mainstay of surgical management. In some instances, it will be placed as part of the initial treatment whereas in other instances it will be placed after another type of surgical treatment to provide long term alignment and provide an internal brace for the tibia. In some instances, telescopic intramedullary nails (nails which can lengthen as the child grows) will be used in growing children to minimize the necessary revisions due to growth.

Application of an external fixator (external frame attached to the leg with pins and wires) for stability and or distraction osteogenesis (separating the bone and allowing new bone to fill the gap to lengthen the bone) is a powerful treatment option for CPT. Achieving stabilization across the ankle joint plays an important role in the treatment plan, and the foot and ankle are often included in the frame construct to achieve this.  Often times, the intramedullary nail is used at the same time as the external fixator.

For this technique, a strut of allograft (donor) bone is used to support the tibia with an anterolateral bow. The bone graft is placed in the inside of the curve of the anterolateral bow under compression with the goal of incorporation and enlargement of the bypass graft over time.

Transfer of a piece of the fibula bone with a vascular supply (major blood vessel to the bone is also taken) from the same leg or the opposite leg requires the special skills of a microvascular surgery team and is recommended at some centers for certain cases of CPT.

A technique which involves the creation of one bone fragment across the tibia and fibula to essentially create a single larger bone at the weak point to help prevent recurrent fracture. Harvest of iliac crest bone graft from the pelvis is often a part of this procedure.

A procedure known as “induced membrane,” which was initially described for reconstruction of long bone defects, has been applied to CPT. It is a two-stage procedure. In the first stage, the diseased portion of the tibia is removed and a cement spacer is inserted. After a surrounding membrane has formed around the cement spacer, the cement is removed and the void within the surrounding membrane is filled with bone graft.

There is often a limb length discrepancy, as the limb with CPT is often shorter.   This may be addressed in different ways depending on the magnitude of the discrepancy and the preferences of the patient and family. In some cases, the growth from the growth plates in the longer leg may be stopped at an appropriate time to help equalize the leg lengths. This surgery is known as an epiphysiodesis.  In other cases, the shorter leg may be lengthened with an external fixator or an internal lengthening nail.

Although not indicated by any means as an initial treatment option, in certain cases of CPT where multiple surgical attempts have failed, amputation with fitting of a prosthesis may be an option to improve function and quality of life.